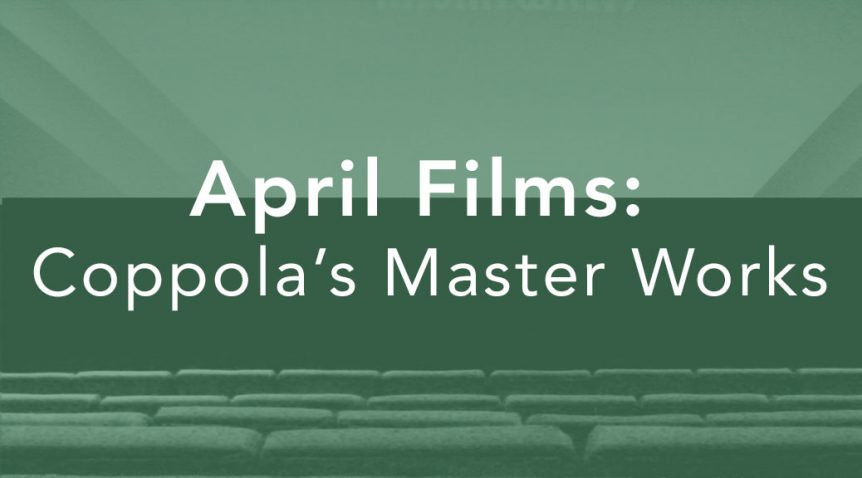 New work projects, and a handful of other things, lead to the lowest number of films in a month in April. That being said, I did tackle Coppola’s master works and a couple big films from some other directors.

I skipped the first two “skin films” that got Coppola his start directing because they didn’t seem all that important. Most of the month was Coppola related, but there was a single contemporary film as well as cleaning up Malick and Glazer. You also see that Taxi Driver sneaked onto the list with a random Saturday viewing with Elliott.

This batch had some heavy hitters, so know that there is little separating the top of this list.

Once again I have films ranked on more than just how I valued them after watching. I know that the cultural significance The Godfather (both parts one and two) will outlast my extreme affection for Malick and To the Wonder for instance.

I only watched one contemporary film this month, and it is the only film I wouldn’t recommend. Midnight Special is completely competent, but it ends up being a boring and terribly average film. I wanted the film to dig into some theme with it’s science fiction screenplay, but this lead to realization that maybe Jeff Nichols didn’t have much of a vision for what he wanted his story to convey. Interestingly enough, there were conversations after the film that likened it to a retread of E.T., but that definitely doesn’t make the film any more worthy of your time.

I think my plan is to either handle Coppola in sections (I’m 8 films in and there are 16 more he has directed) or just quite with the early works and master works under my belt. Coppola has an incredible point in his career where he releases four exceptional works in a row. I will write a post about Coppola’s first 8 films (minus the skin flicks) soon, so I will only touch on a couple things here.

I can see why Apocalypse Now is held in such high regard by so many different people. After doing some research I decided to go with the original theatrical release first. I may go back to the director’s cut in the near future as there are heated debates about which is the better version. This film is pure horror, but like some of the other great war films I’ve seen recently (Full Metal Jacket, The Thin Red Line, Paths of Glory), their are elements of humor and a tremendous amount of empathy. The absurdity of war and the abuse of man is something that these great war films really drive home for me. Apocalypse Now is even less structured than these other films though. There is a plot, but it doesn’t really matter much. You end up somewhere you weren’t expecting, and you’re still trying to process everything you’ve seen. These films all call into question following commands and what the fuck sanity is. Apocalypse Now is the best of the bunch in my opinion. It’s bigger, more terrifying, and offers less answers. This is one I will revisit many times.

Taxi Driver left me with the initial shock that our culture hasn’t addressed sexism and gun violence in the 40 years since this film came out. The ripples of influence of this film can be felt across many other works. The format of violence, solidarity, and cars can be seen in films like Drive and No Country for Old Men. We still live in a society that can alienate and push people to violence as a way to matter. This film informs a country who’s headlines are dominated by mass shooters. These shootings still exist because violence matters. It brings a voice to anyone. Travis is one of the most iconic characters in film. A truly damning look at what American culture can create.

I talk about To the Wonder in more depth in my Malick post, but I should share a few thoughts about it here. I have never had a film assault my way of life like To the Wonder. It shines a spotlight on middle America, and I’m pretty sure I don’t like what I see. The setting of the film is looks so close to what I see every day. The lack of removal from setting amplifies the emotional impact of the film in a way that a more foreign setting could not.

I’ll of course dig deeper into my thoughts on Coppola soon. Just know that all of his early works are worth watching. It’s fascinating seeing the ground he covers. The Rain People is exceptionally good and is probably not very well known. I also absolutely include The Conversation in his list of master works. I would argue it’s a purer story of the downfall of a man due to his own ego than The Godfather Part II.

Sexy Beast is awesome. You can read more about it in my director study on Jonathan Glazer.

Life may be keeping me from the blazing pace I set early this year as the next two to six months of work may get really crazy. My goal is to shoot for 12 movies a month while things are hectic. I’ll still easily clear 150 films this year, and I still have a shot at 200 if I can find a little extra time.