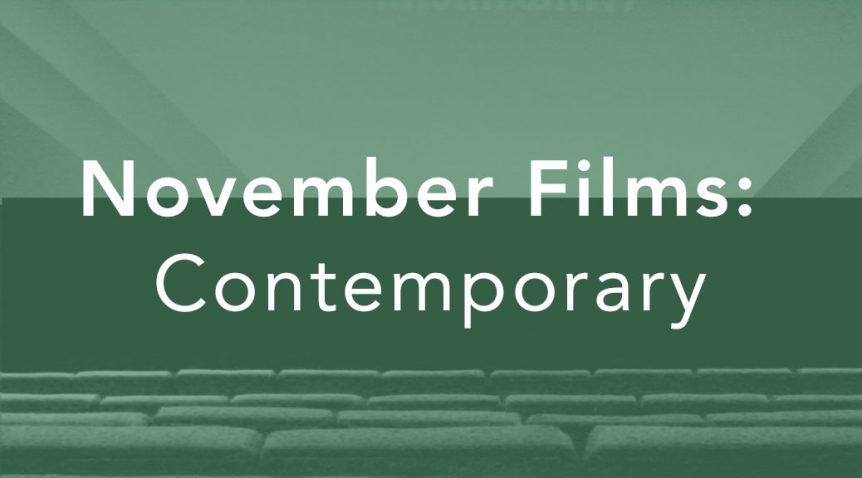 In November I was able to finish up Scorsese and watch quite a few contemporary works. This included 3 major releases, an extremely high number for a given month for me. The Moxie was still the big winner, earning 4 visits this month.

Once again I’m removing Scorsese from the ranking list:

My scores on these are actually pretty bizarre. In retrospect I think The Edge of 17 is a more important film to see than everything on the list besides the top two. I also think Hacksaw Ridge is the only film I would recommend against watching. I didn’t even dislike Denial, I just didn’t think it was a good film.

I’m planning on working through Kelly Reichardt as my next director study because of how enthralled I was with Certain Women. I haven’t been that absorbed by a film in a theater in months. Her first film, River of Grass, is extremely rough around the edges but shows glimmers of what makes Certain Women so good. I will go deeper once I delve into the rest of her work.

Moonlight was a film that was on my radar from the very first preview I saw. I’m not sure the film delivers as a whole, but the last act is cinema at it’s finest. I’ll allow for some overly pretentious camera work and a middling script during the first two acts in order to set up the gut wrenching finale. It felt so real. Moonlight wants you to see the struggle for identity in a society where hyper masculinity is the only acceptable form of self projection. I think all the pieces lend to that thesis, even though some are a little rough around the edges. Mandatory viewing for the year.

Going in I didn’t know that Arrival was directed by Denis Villeneuve, but I wasn’t surprised to learn that after the fact. Last year I enjoyed Sicario and then went back to watch Enemy and Prisoners. I think those films are all great (Prisoners is definitely the lesser of the group), and I could definitely feel some visual continuity between Arrival and his other work. While this film was still paced well, it’s script felt forced and the theme of humanity’s need for unity was delivered with zero finesse. That being said, Amy Adams’s character was one of the best female leads I’ve seen all year, in that her gender had little to do with the roll she played in the film (I think just being a parent outweighed being a mother). The cinematography was sweeping and beautiful. I’m glad Arrival just passed $100 million worldwide, because I want to keep seeing the films Villeneuve makes.

I wanted something that was a quick watch one evening after dealing with multiple long and dense films. I decided on Nerve, because I had a mild interest in seeing it in theater. I was pleasantly surprised with how fun (albeit silly and heavy handed) the film was. The themes of where internet anonymity could take us where not all that interesting. What was interesting was the way that the directors made a film that captured the internet aesthetic and portrayed it on screen. The way that characters interacted with Facebook and their phones was all represented visually. Once again, the film was also fun.

I thought The Edge of 17 was going to be something special. It sets up our protagonist as a self absorbed loner with her reasons (dead dad), and I thought that maybe it was going to critique the better-than-everyone-else attitude that some people carry around. Instead we get a quirky romp through modern day high school that hits all of plot pieces necessary. In the end she’s a middle class white girl, and she’s going to be just fine.

I was expecting something different from The Handmaiden. The preview left me thinking it was going to be darker and include more action. I guess there was a lot of action, if we’re talking about girl on girl sex. There was also a lot of exposition in this film. Park Chan-wook revisits most of the first half of the film in the second half. This time we’re treated to a completely different perspective of the events, but man do things start to drag. The coolest scene of the film is when we revisit the first sex scene from a different characters perspective, which turns the idea of naivety on it’s head. It also shows how it’s impossible to be 100% on the same page as your partner during sex because of the imbalance between internal and external positions of power. It’s a fun film, but it’s not for everyone.

I honestly don’t remember much about Denial. It had almost no impact on me. I remember that it missed most of it’s attempts to set up any sort of suspense, and the film resolves exactly how you new it would. A completely adequate bore.

I have actually never seen a Mel Gibson movie, but after Hackshaw Ridge, I don’t think I’ll have to see another one. There is some sincerity here, but there is also a bizarre misbalance of tone. This is the goriest film I’ve ever seen. Gibson seems to love to show headshot after headshot. He shows you mangled corpses, explosions, and men on fire repeatedly. It was definitely excessive. He does all this to tell the story of an irrationally faithful man who saves many soldiers on Hackshaw Ridge and takes no life. The film doesn’t seem to ever try to grapple with the fact that Christianity and war are incompatible beliefs. Just like it’s protagonist, the film puts it’s head down and runs forward blindly.

I like going to the theater, so November was a real treat. I’m looking forward to a couple December releases, so we may have another good month. I’ll also work on Kelly Reichardt and start thinking about a couple end of the year posts. I’ll probably do a top 5 films of 2016 and my 5 favorite films of all time (I think the whole list will be films I saw this year).