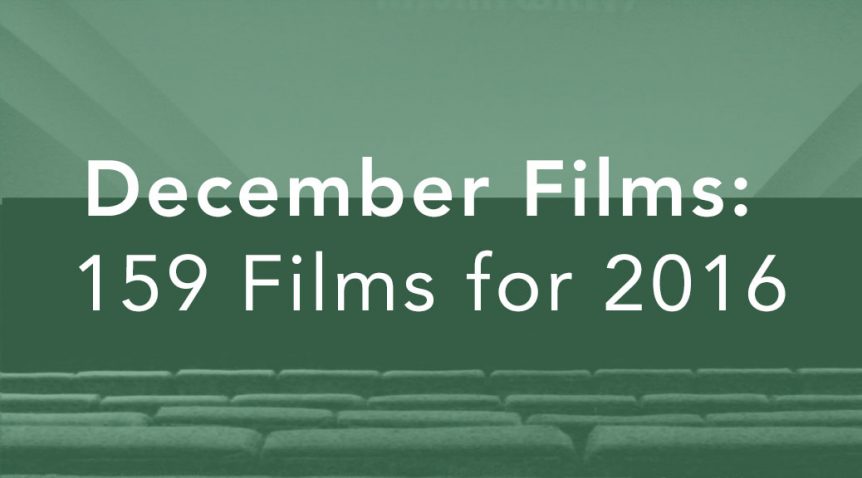 This year has been an incredible journey for me as I watched 159 films. I discussed why I wanted to watch more film in a simple blog back in February. I think my reason for watching film is now simpler; it’s the fastest way to change your perspectives and upset your ideas.

I’m not sure I’ll stick to the monthly blog format I’ve established in 2016. I still want to watch a lot of films, but I also want to focus on other areas of growth this year. I love watching a film a day, but I need to really focus on creation this year.

The beginning of the month was spent working on Kelly Reichardt (who I still need to finish) and the last half was catching a great group of contemporary works. In the middle we also had Jessica’s favorite film.

I went into Manchester by the Sea with little expectation. I thought the trailer looked like a super cliche drama, but the amount of good reviews forced me to give it a chance. I can’t think of a film I’ve watched this year that was more emotionally draining. For two thirds for the film, I was at the edge of tears as the weight of Casey Affleck’s character’s despair come into a clear focus. The film did an expert job leaving many of it’s themes unspoken as it allows it’s characters to live in their world without having to narrate their existence. In the end, we’re not left with hope or despair, but something in between. Something that looks a lot more like life.

If there is one film that I think everyone should watch, it’s 13th. This documentary on the systemic racism in the United States, was released on Netflix, so it has an infinite potential for viewership. The film is well constructed, and it drives home it’s central ideas by returning to a tally of U.S. citizens in the prison system over the decades. Each time this number returns and grows, as we inch closer to 2016, you feel a sense of dread. If you’re a human being, this is mandatory viewing.

I watched Jackie by myself in an almost sold out 1 pm showing on a beautiful Saturday afternoon in Austin, TX. The film enthralled me, as the camera spent a great deal of it’s time right in the face of Natalie Portman. The stark contrast between the extreme symmetry and vertical lines and the quivering face of Portman, tells a story of a woman who acted strong, but was forced to weather an extremely brutal life. The beauty and sadness in this film where moving and poetic. I’m not sure there was a frame of this film that didn’t leave me fully absorbed.

The Dirties is the first film from Matthew Johnson, the director of the 2016 release Operation Avalanche. While I didn’t love his sophomore effort, it was a lot of fun and had a couple shining moments. The Dirties follows the same formula, but actually builds towards a meaningful climax that the viewer is unsure will actually happen. The film manages to have empathy for all it’s players, though it does at times feel cheap because of the formula for storytelling Johnson uses in both these works. Matthew Johnson loves film, but I’m looking forward to him making a film whose purpose isn’t to express that point.

Jessica’s favorite film is 12 Angry Men, and I understand why. It’s a masterpiece in terms of acting and cinematography. The camera is an essentially a 13th character as it occasionally sits still surveying the entire room, or jump cuts to a face in order to drive home a point. I found some of the film more than a little contrived, but I don’t think my criticisms really matter.

Man, La La Land is a tricky film to deal with. I left the theater with a smile on my face. I had a good time with the film, and enjoyed it much more than Whiplash. That being said, there is plenty to take issue with here. The nostalgia drips from this film in a way that makes you curious if Damien Chazelle is as clueless as his protagonist. The answer is probably “no,” but La La Land is still a good time. Just don’t expect something as life changing.

It’s odd, but the best critique I’ve heard about Nocturnal Animals is that it is toothless. It’s trying to be an intense drama comparing a stereotype of the rural to the stereotype of the city. This theme lacks clarity throughout. It’s not to say that pieces of the film haven’t stuck with me, but it just falls short of everything it attempts to accomplish.

Rouge One was a mess. It’s a jumble of characters, planets, and ideas. When it finally comes into focus in the last act, the film is just retreading past Star Wars battles beat for beat. That doesn’t mean that the spectacle of the battle isn’t a lot of fun to watch. The part of me that enjoyed Star Wars as a kid is always going to enjoy getting to revisit the familiar aesthetics of the visuals and sounds. It’s an obvious cash grab involving a story no one needed to know, but I still enjoyed the dumb ride.

Well, that was 2016. I’ve probably doubled the number of films I’ve seen in my whole life over the last year. I’ll continue pursuing directors and trying to keep up with contemporary works. I will always look back fondly on the last year. Lots of it was really terrible, but I was able to make some meaningful emotional strides that I can at least partially attribute to watching a shit load of films.