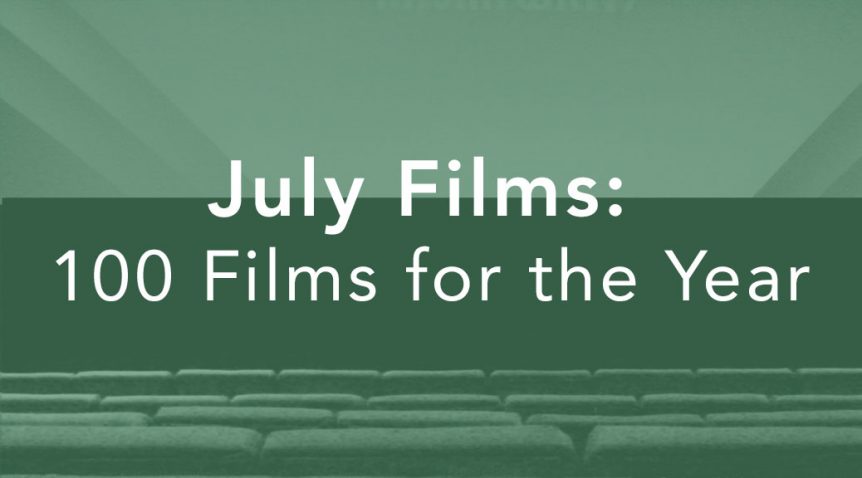 If you include the repeat viewings, I watched 100 films this year. While my pace is still not as strong as the early part of the year, I feel good about accomplishing the goal of getting to 100. I don’t know if I had seen 100 films the 5 years prior to 2016, maybe not even 100 films in the last 10 years. I can now attempt to talk about a director here or there when sitting down with people who know film. This is exciting.

July was similar to June, all David Lynch and contemporary films.

We have ourselves a David Lynch sandwiched with Moxie screenings.

Not a lot of surprise on rankings here:

As always, I’ll do a post on Lynch (a daunting task) as soon as I finish his works. I will say that Lost Highway was really hard for me to deal with. I think my initial reaction to it was heavily skewed by how strange the structure and plot played out. I think you open up his works as you settle into some of the techniques and motifs that are repeated in Lynch’s dream films. I should really go back to Lost Highway now that I have a greater ability to digest or allow the bizarre nature of Lynch’s later works. I’m making all this fuss over a film I gave a 4.5 though, so I can say that I absolutely understood it was unlike anything I have ever seen.

Dheepan had a whopping two showings in the middle of the week at The Moxie, and I’m really glad I went. The film is simple in premise but is shot with the utmost compassion for it’s characters. The film shows the complexity of survival, love, and language in a slow and beautiful way. It also shines a light on the ways masculinity can differ, or stay the same (violence), across cultures. This was also one of the first times I left a film and was able to easily see the influence of another extremely important film. I won’t go into detail, because it has some spoiler potential. Find a way to see this film if you can. It is well worth the effort.

I’m not sure I took anything away from Hunt for the Wilderpeople, but it was one of the more enjoyable experiences I’ve had in a theater this year. The film is charming, ridiculous, funny, and absolutely something I can recommend to anyone.

I’m not really sure how to deal with documentaries. I haven’t watched many since making film a priority in my life. I will say that Tickled is an entertaining and bizarre time. The movie has a surprising amount of empathy and covers a lot of complex ideas around manipulation and the power that comes with having a shitload of money.

I think I have to tell people to see Swiss Army Man even though I’m not sure I like the film at all. If nothing else, it is a case study in how music and cinematography can manipulate your feelings. The premise is silly and completely unique, but the film uses that unique premise and interesting visuals to tell a wholly boring and conventional story. It wasn’t funny and it dragged on in a The Revenant sort of way. I do have hope for what this director duo does in the future with feature length film though.

Café Society was boring and felt exactly like so many movies I haven’t seen. It is visually stunning, and I’m sure that it would be worth digging into the lighting choices of the film. The performances were all great, and the meat of the story was heartbreaking. The end of the film is easily it’s strongest part, when Woody Allen gets his dialogue out of the way so his camera can spend time on his leads’ faces.

Yay getting to 100 films. Boo having to decide who to jump into next. Lynch has been one of the most important dives I’ve taken this year.