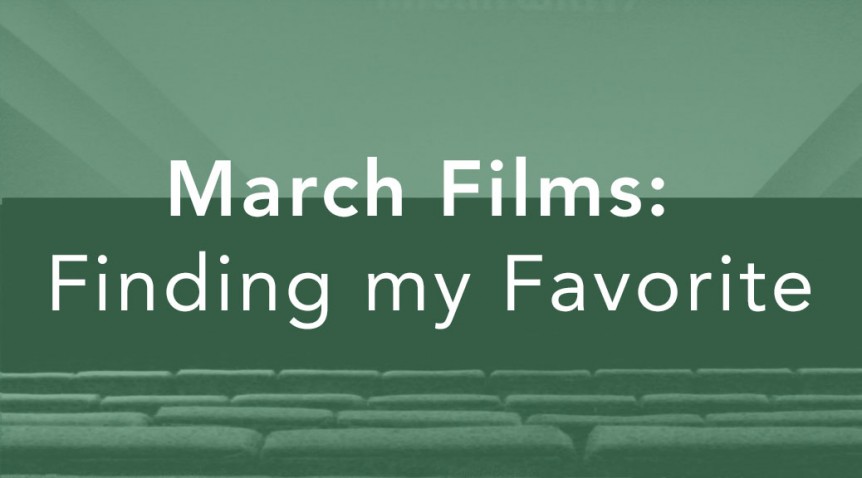 March was a busy month in which I couldn’t maintain the momentum of watching a film a day like I did in February. In the 17 films that I did watch, I was able to come across a film that I will claim as my favorite. In the past I have said that V for Vendetta was my favorite film because I have probably watched it more than any other film. The last time V for Vendetta was at least 4 or 5 years ago, so I was really hoping to find a favorite film in my exploration for the year. I’m sure that “favorite” is a silly term to use for films, but it’s something that comes up in everyday conversation. I also assume that there is a high possibility that my favorite film will change hands many times over the next 9 months.

Here is the list in the order that I watched them:

This is quite the list if you ask me. There are some huge films at play this month.

I finished my directory study on Stanley Kubrick in March. I will touch on a couple of his films that I watched this month, but the other blog post has a significant amount more of my thoughts. I do bring up the point that ranking Kubrick’s films is silly, and when you throw Malick into the picture, ranking this list seems even more silly.

First off we need to do some house keeping; I am ignoring my initial star ranking when ranking the films in order. I think films like Son of Saul and Birth affected me deeply, but I’m not willing to say they are better films than Spring Breakers and A Clockwork Orange. It is important to consider things like longevity. I’m really curious where Son of Saul will end up in the long run. Needless to say, there are only two films I don’t recommend seeing on this list. March was amazing.

So what do you think is my new favorite film?

If you guessed 2001: A Space Odyssey you are wrong. While Space Odyssey is life changing and one of the most important films of all time, it is not the film that I claim as my favorite.

The New World by Terrence Malick is my favorite film. I’ll be talking more about this film (and the rest of Malick’s work) when he gets his director study, but I do have to share some raw thoughts about my favorite film. The New World shows off one of the idioms introduced to me by Elliott; the camera loves its subjects. Malick loves nature. Malick loves the natives. Malick loves the British. All this affection for characters is unparalleled by the time that Malick spends with John Smith and Pocahontas together. This film is about love, and how complicated (yet simple) it can be. This film is moving and devastating. The New World transformed what I thought could be expressed by film, and this is why it is currently my favorite.

I’ll talk more about Malick in his director study, but I will say that I struggled with his first two works. Both Badlands and Days of Heaven didn’t grab me like the later Malick works. I think I need to revisit these films soon, as getting used to Malick’s aesthetics; through his early work, may have made me more willing to fully embrace his later work. I will also say that his early works may suffer from the lack of technology that allows for the editing in The Thin Red Line, and the films that follow it, perfect.

I talk about Kubrick in much more detail in another blog post. I will say that I plan on spending a couple weeks each year revisiting his work. I have a few weird opinions about some of his works, but literally every feature he has made is worth watching and knowing.

Birth and Under the Skin will most likely be covered in a really brief directory study Jonathan Glazer. It will be brief because Glazer has only made three films. On the recommendation of Elliott, I watched Under the Skin first and then quickly mopped up the rest of his filmography. All of it is worth watching.

I finally watched Spring Breakers, which is one of Elliott’s favorite films. It was incredible. The pop sensibility and the full embracing of the world it chooses to critique is something I have seldom seen in film. While the film is critiquing, it is not criticizing. It merely would like you to question every aspect of its world. An art film that comes in the guise of a pop film; awesome.

Son of Saul was not what I was expecting. Flawless editing and a cramped 4:3 ratio made the film play like nothing I have ever seen. It doesn’t spend time showing you the physical horrors of a concentration camp; most of those things are kept from view by the tight ratio and a camera that is almost fixed to the main character. Instead we see the horror of a man losing all sense of reality as he lives a day in his life. We see him cling to some semblance of ritual that is being extinguished along with the lives of the people who hold those rituals dear. The film feels like one seamless day. The camera doesn’t free itself until the end of the film, when the main character’s burdens are gone. It’s hard to watch, but should be mandatory viewing.

Mustang dawdles and feels quite contrived, but all that builds into an incredible pair of explosions that makes the film punch you in the chest. First time filmmaker Deniz Gamze Ergüven shows incredible patience, letting us observe girls being girls. The film has its flaws, but boy does it leave a lasting impression.

I didn’t enjoy The Witch much. It’s on of those films that is more fun to talk about than watch. I do also love that your average horror moviegoer had to deal with that film. It definitely has a lot to say on femininity and conservatism. I should probably watch it again.

Creative Control is hardly worth talking about. Benjamin Dickinson writes, directs, and stars in a pretty glossy and uneven film. It wants to make big statements about humans and technology, but it stumbles over every obtuse point it tries to make.

I like Red vs. Blue and Roosterteeth, but Lazer Team is bad. Seriously, don’t see it.

I have a favorite film.