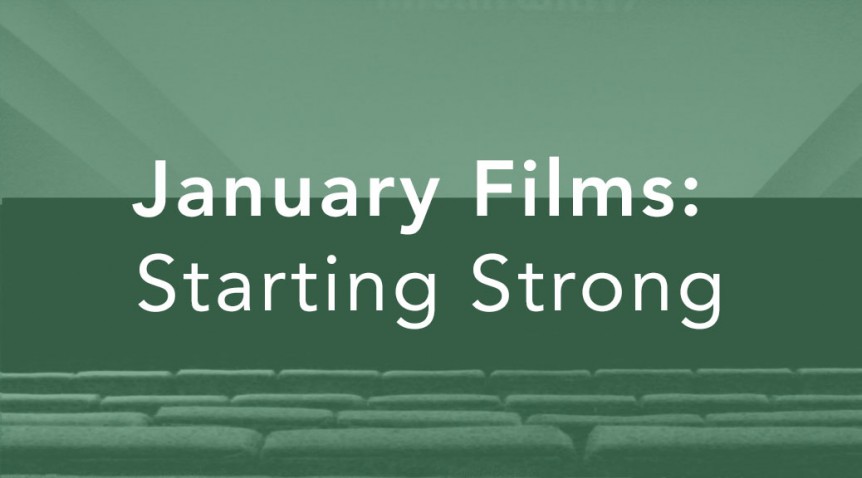 I watched (at least) 16 films in January.

January the first month that I began keeping track of every film I watched. I actually started this process on the 9th, so I may have missed a couple films at the very beginning of the year.

I record the name of the film, the director, the date the film was released, the date I watched the film, a star rating out of 5, and a short review on an Excel spreadsheet. The review can be a single word to a couple sentences. I wanted to have something to go back to and spark my memory about what I thought of each film.

This month I also developed the habit of reading the Slant Magazine review of each film after I write down my own thoughts. This helps me to further the critical thinking I want to be able to apply to film.

January seems to be a great time to start watching a lot of films. I was focusing on watching things I missed in 2015, including all the best picture nominations.

The top two films on this list are absolutely essential in my opinion. Carol was incredibly moving and was laser focused in its composition. 45 Years is terrifying and brilliant. Both films let their actors faces tell much more of the story than any given piece of dialogue. Both films end with looks that, even thinking back to them now, give me chills.

The most disappointing films are the two long, cold, fancy director affairs. The Hateful 8 was long, predictable, and had some terribly uneven acting. Channing Tatum continues his hot streak though, and there was some fun to be had once the third act finally shows up. This film did have the advantage of me cringing while people in a theater laughed at a woman being punched in the face. Points to Tarantino for manipulating his audience to articulate a greater idea.

The Revenant was probably the film I enjoyed the least in January. It was beautifully shot but executed with zero grace. The acting didn’t do anything for me. The script was excessive. The story was predictable. It wanted so badly to be a great film, but it missed on every mark with me. “Why am I watching this film,” is never something a film should let creep into your mind.

The last film I’ll talk about is the obvious stinker of the bunch — Sisters. This film opens with a joke about a perceived homeless person, and only continues its nosedive over the next two hours. Ouch.

I don’t have the skillset to write full reviews on each film I watch yet. I’m not sure that writing full reviews is something I want to do in the future.

I am open to conversation about any of the films I watched in January, so ask away. I am more than happy to try to articulate why I rated a film the way I did.