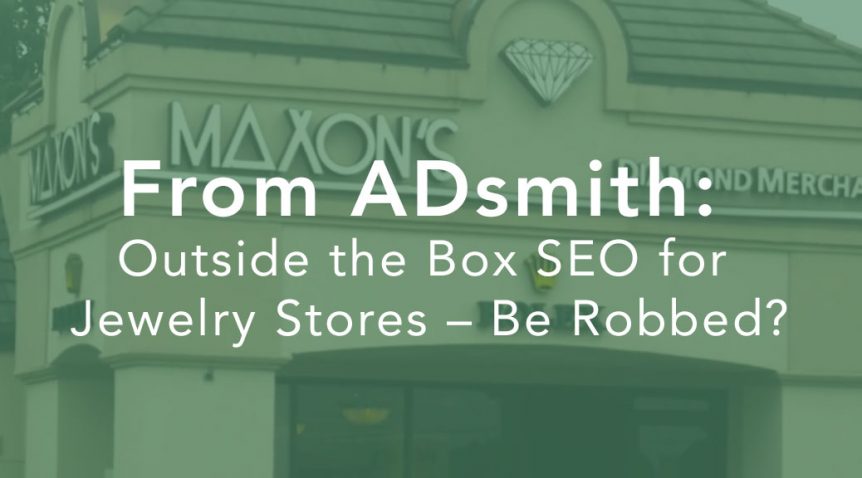 There is an old adage that says, “There is no such thing as bad press.” While we could argue the validity of that statement for most businesses, it may hold true in the eyes of Google’s search algorithms.

We at ADsmith were horrified to hear that three men carrying hammers recently robbed our clientMaxon’s Diamond Merchants. Thankfully no one was hurt, but the thieves got away with 11 Rolex watches. That is pretty scary stuff, and so far only one man has been arrested.

We don’t see a lot of jewelry store heists in Springfield, MO, so every media outlet in town ran a story. There were segments and articles on the evening news, in the newspaper and on the web. Local reporters were tweeting about the story and putting out information in their Facebook feeds.

So what does all that have to do with SEO?

Fast forward to Monday; I’m doing my morning routine of checking SEMrush (our keyword tracking software) to see if there are any major keyword ranking changes that could signal an emergency or a win. Hmmm, Maxon’s keyword rankings are up 10% over the last 7 days, I thought to myself. We’re working on refreshing their website, so we haven’t been doing as much ongoing SEO work and the jump in rankings was a surprise.

I dug into analytics and saw a 120% increase in organic traffic for the weekend after the robbery compared to the weekend before. We even saw an increase in pages per session and average session duration.

We all know that getting press is a great way to boost website traffic and help with your rankings in search, but I was surprised at how fast everything moved after the fact. We saw keyword rankings increase the day after the robbery. That’s pretty fast.

So what did we learn from this?

Occasionally, a bad thing can be flipped on its head and be turned into a digital marketing win!